Here the SO user showed me a not so well documented additional switch of the certutil -encodehex. So you can pass an additional number as a format flag. Here they are:

I just noticed that "certutil -encodehex -f strings64.exe strings8.hex 8" doesn't give "base64 - x509 with headers", but does the same as "number 4" ("in columns with spaces , without the characters and the addresses") at least on my win10.

I ran a bunch of tests on Windows 10 with various flavors of -encodehex, and here is what I found.

CERTUTIL has a surprisingly low limit to the size file it can encode/decode. I'm not sure about the exact value, but the encode limit is only in the tens of millions range.

CERTUTIL accepts both decimal and hex notation for the type argument, but not octal.
Hex values must be prefixed with 0x
Since octal is not recognized, it is safe to prefix any decimal value with zeros.

The type argument seems to be flag based, but in a very freaky, inscrutable way - the meaning of low bits changes depending on the value of other bits. but the top two high order bits have a constant meaning:

0x40000000 bit - The output is encoded on a single line, without any line terminator.
Depending on the format, the result may not be able to be decoded with CERTUTIL.
Documentation states this flag is not supported by XP.

0x80000000 bit - Use \n line terminators instead of \r\n
Note that CERTUTIL only accepts positive numbers, so the type value cannot be computed by SET /A, else it will be converted into a negative value.
It is best to specify a type with this flag using hex.

Unless the 0x40000000 bit is set, any -encodehex result can be decoded using either -decode or -decodehex (whichever is appropriate).

Generally, each line of output represents 16 bytes of input (except for the last line). The hex pairs are delimited by spaces, with two spaces between the 8th and 9th bytes.

If the 1 bit is set, then 3 spaces are appended to each line, followed by the ASCII string representation, with control codes and non-ASCII bytes represented as dots.

If the 2 bit is set, then the hex address is prepended. The address is always represented with at least 4 hex digits (possibly left 0 padded), and followed by a <TAB> character.

Generally all encodings are identical, with 64 bytes per line in the output, and = padding appended as needed, regardless which type is chosen. The only thing that changes is the format of the beginning/ending headers. The only exception is the undocumented 0xD type.

dbenham wrote: ↑
03 Sep 2018 10:55
CERTUTIL has a surprisingly low limit to the size file it can encode/decode. I'm not sure about the exact value, but the encode limit is only in the tens of millions range.

dbenham wrote: ↑
03 Sep 2018 10:55
CERTUTIL has a surprisingly low limit to the size file it can encode/decode. I'm not sure about the exact value, but the encode limit is only in the tens of millions range.

I thought I remember reading somewhere it was roughly 75MB.
Top 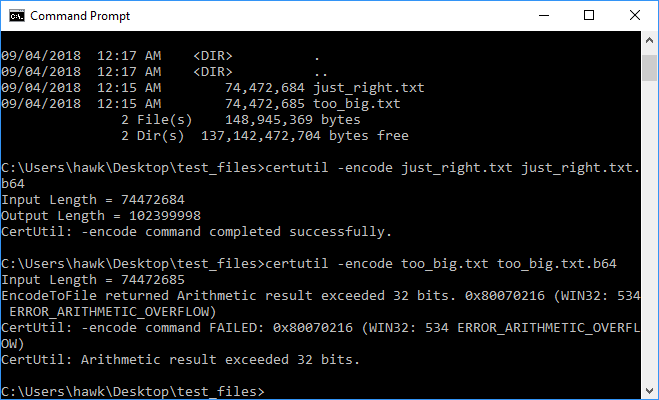 It's possible that your mileage may vary, but I don't know why it would.
Top

I tried to use encodehex instead of encode, and it failed well before 74 MB,
Top

I tried to use encodehex instead of encode, and it failed well before 74 MB,

downloading files with certutil is no more possible:

As certutil has access to sensitive directories it was able to download (and overwrite) files in system directories this way of downloading is now taken as thread:

Though I think is still possible to be used for bad things with -decode or -decodehex and with a file downloaded with CURL or BitsAdmin.
Top

There´s indeed a file size limit and I have verified that.

A single extra byte and you get the error. This either a limitation of the API used to encode the files or an operating system issue or an architecture (x86 VS x64) issue.

Any of you remember the good old days of Windows XP 32bits ? ... If you were to install it on a machine with 4GB of RAM memory, it would only be able to read up to ~3GB of RAM. (Just an example)

The simplest workaround to this issue is create a script that verifies the size of the file you want to HEX encode, and split it into 51199999 parts:

and so on... then encode each part separetedly and respectively and save them into memory or temporary files, then join them in the respective order and finally save the HEX encoded data to a single file. The bigger the file the longer you will wait. And on older machines it could be a real pain to encode and decode the files.

Notice that HEX encoding data produces an encoded data with double of the size. So a 4 bytes file, upon encoded will be 8 bytes. no big deal, right...but imagine a 2 GB ISO image for example.

That´s why Base64 is the way to go and most apps, including in the web, will be able to convert to and from. It produces files considerably smaller compared to HEX (which is "Base16" .

Regarding some arguments being flagged as malicious by antimalware, this is because some people do nasty things with legitimate features, like eg. using to download malicious files and overwrite local files, encapsulate malicious binaries into script based files like .BAT / .CMD

I remember an old tool that would "convert" an EXE to BAT file by converting the bytes into HEX and writing to the batch script (text based file) and then using a builtin DOS program (mode.com ??? ) to re-assemble the code back to an EXE that would be extracted anywhere and run.