Hello.
I was waiting to publish this later, but I think is better do it now. Is for present to all the users of this forum the project "Enhanced Batch" (abbreviated in this post as EB), developed with my friend Jason Hood.

Is a tool wich purpose is "Improve the functionality of your classic Windows batch files".

For example have you wanted this next:?
- Easily print emojis (with Windows Terminal)
- Know the line number in which for /f loop is processing
- Have a infinite loop that allow easily go out of it?
- Access to a parameter index greather than 9 whitout need of use shift?
- More flexible range generation of number than for /L ?
- No slow goto ?

With EB you can do.

At this time, after round one year of development, the code

Currently have no release, because we continue working on add new features, but you can compile the current code using TDM GCC MinGW-w64 5.1.0-2 with the command:

The code is available in:

One you have the dlls you need run this command:

And that is all. Now you have access to new features of batch and EB filters and EB commands called "extensions".

Here a give you some little examples of the thing you can do with a "new batch syntax" (EB syntax): 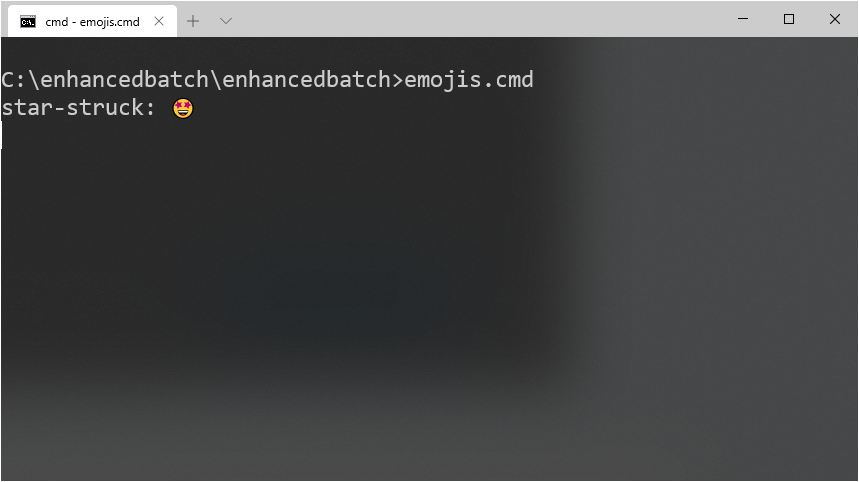 Save a large text in other space rather than environment block, called heap:
heap-example.cmd

Also you can notice how EB, by default in case of error says the batch filename and the line whre the error was produced, in this case the line 10. 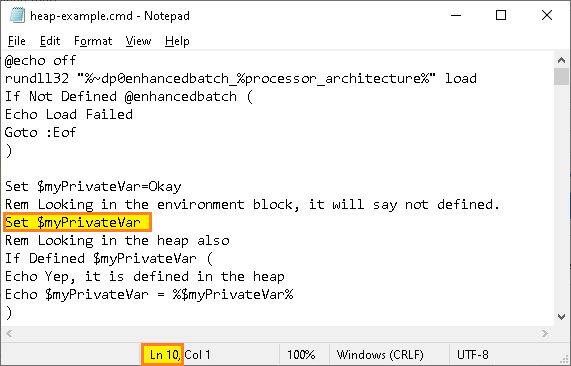 
The best way of know the tool is through the demo batch files:
Here I present some slides of the demos:

demo.cmd (this is an animated gif, you need wait a little bit for see each "slide") 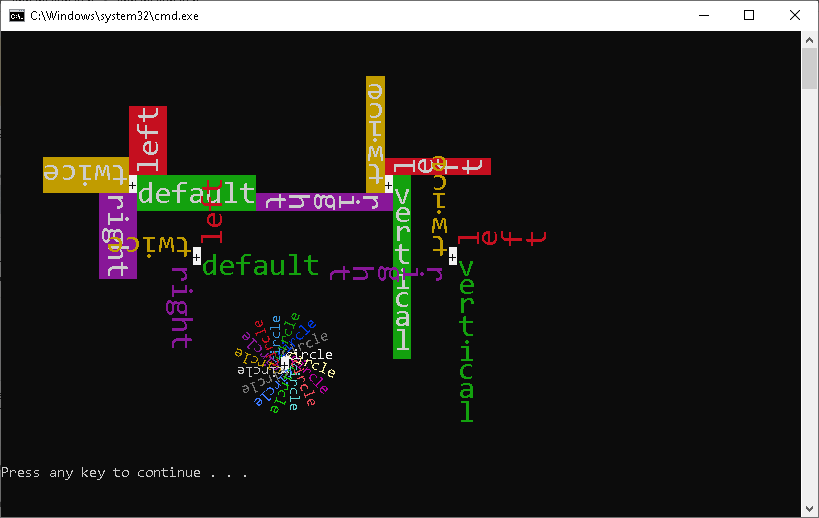 Any suggestion for this tool is welcome, we continue the development with the hope of release the first version in a few months.
Feature request can be posted here:

The documentation of the tools is in

EB is compatible with all cmd.exe released versions since windows 2000 !!
Top

Interesting project. I've had a brief moment to try this out - I see some very nice features

I'm looking forward to the full release with documentation

very good!! That's what I was talking about. You were faster to publish it so I will cancel my project
Top

I'm looking forward to the full release with documentation

thanks Dave. Minutes ago I updated the documentation in the site related to:

With that is almost update, is only missed the documentation that you can found in the caller extensions.

About full release, is needed wait some time.

Thanks Daniel, about your project, it is nice also.
In my case I will keep with EB, because with that we are trying to solve many things related to batch, for example, it provides faster find of labels, no more slow goto, for infinite, timers. If you are interested on write small 2d batch games, I think with EB will be possible, altough is not the main purpose of the tool.
Top

could you implement my sprite viewer?
Top
Post Reply
5 posts • Page 1 of 1